Enigma, Colossus, or the history of British cryptography

I went to Bletchley Park today. One hour drive was a good reason to go. During The First World War it was a top secret military base. Here Alan Turing cracked Enigma codes, and the Colossus, the world’s first electronic, digital, programmable computer, was built also here.

Now it is a museum of cryptography. Recently the Colossus was re-built, and now available to see it in action. My target was to see the Colossus and Enigma.

Today was a normal english day – raining all the way through. My lovely big brolly was incredibly useful. 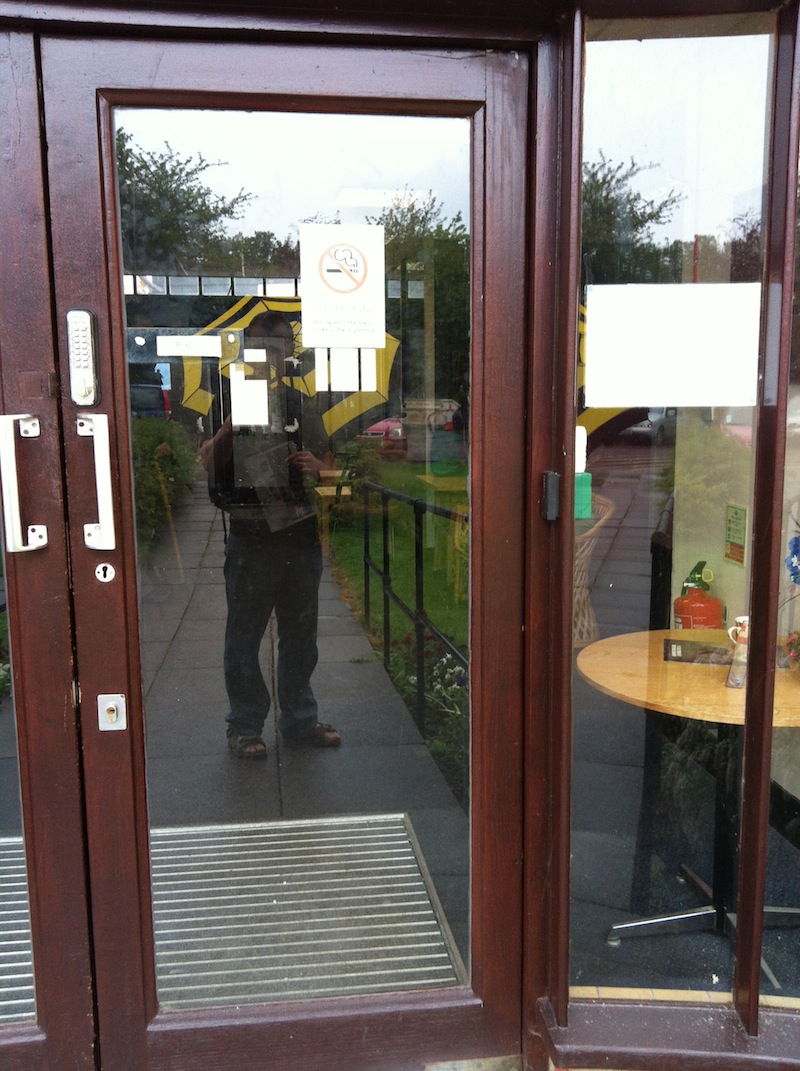 If to skip a sticker on the windows, you may think that The War is still on. 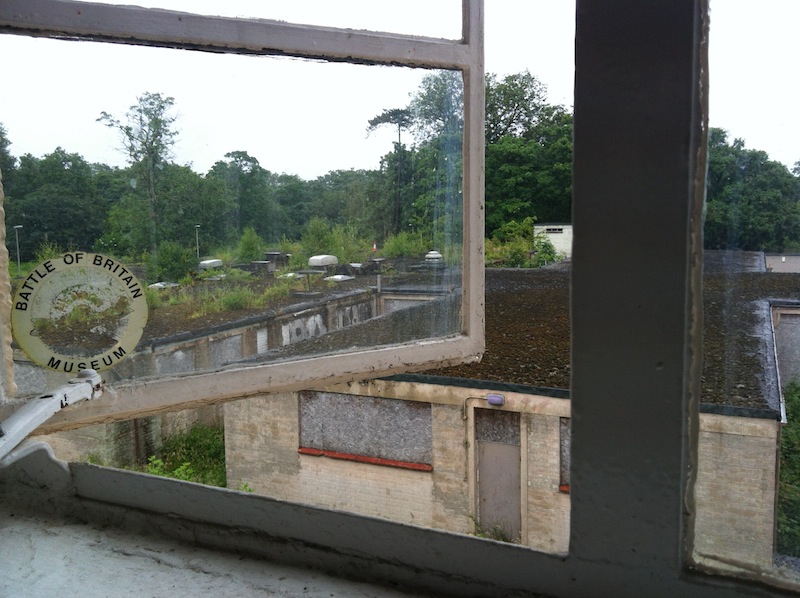 Illustrations in the past were always created with love to details and general beauty. 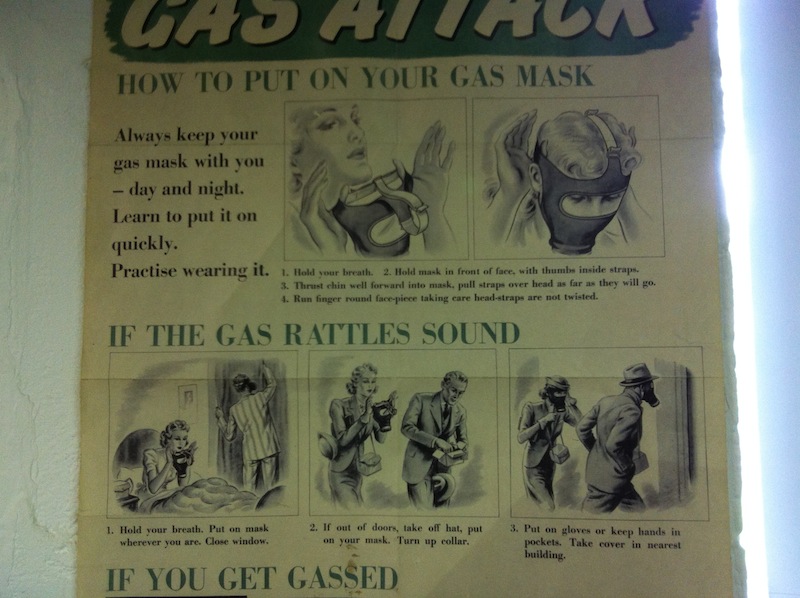 A revolver. Just caught my eye because it was so close. 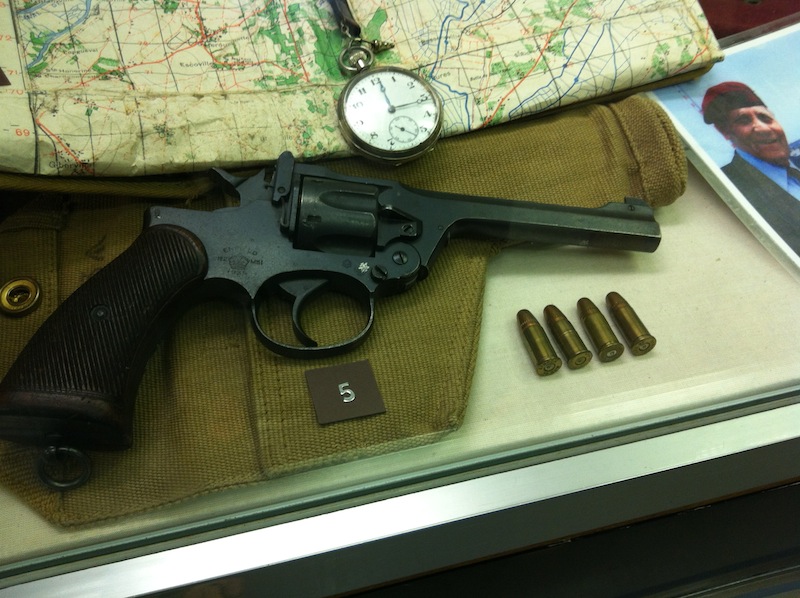 Frankly, I saw MP 38 (aka Schmeisser) so close first time in my life. 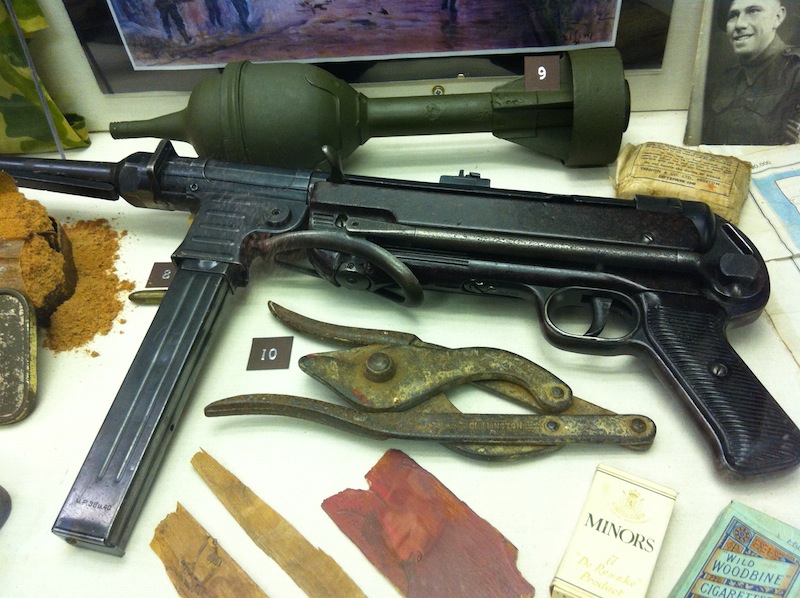 Do you recognized this tool? A twisted-pair crimp tool? This was from the 40th. 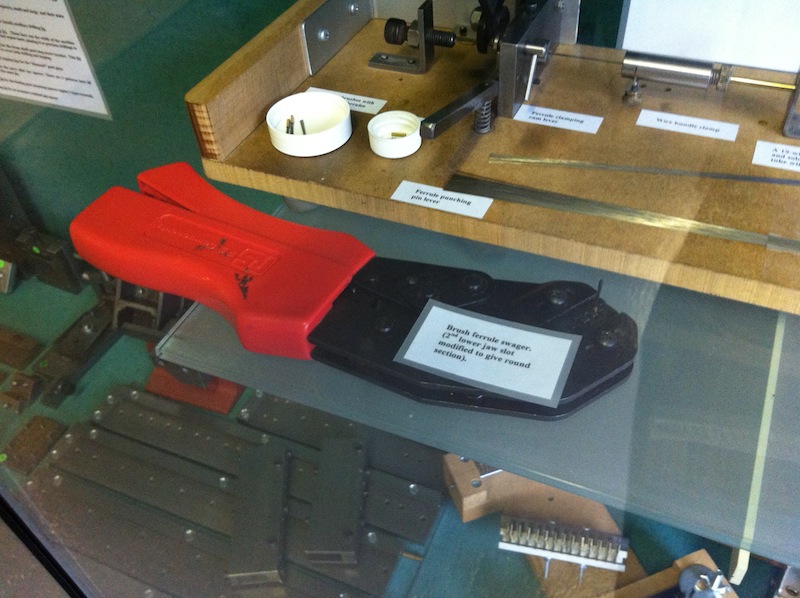 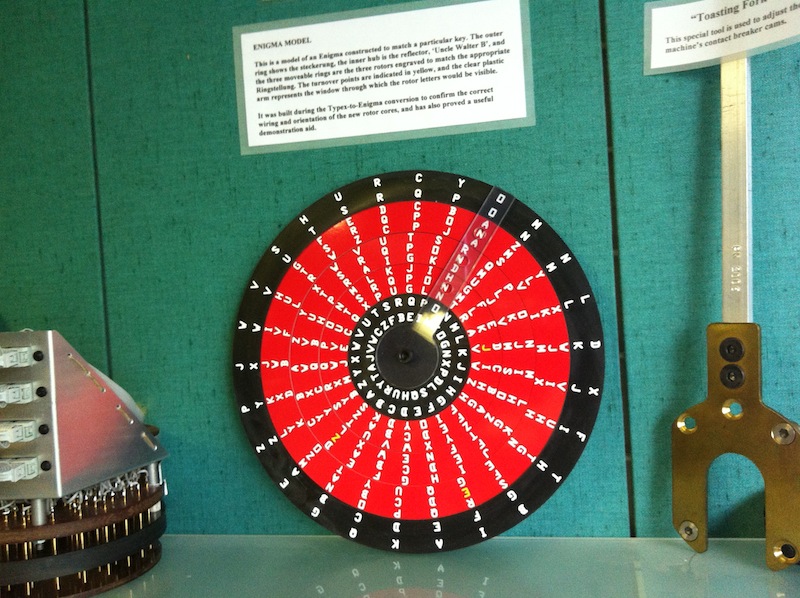 In fact, the Enigma. To be exact – a bunch of them. I imagined the Enigma as a particular device which I saw in the American re-make of the “Das Boot” movie. But looks that even lazy people manufactured it. 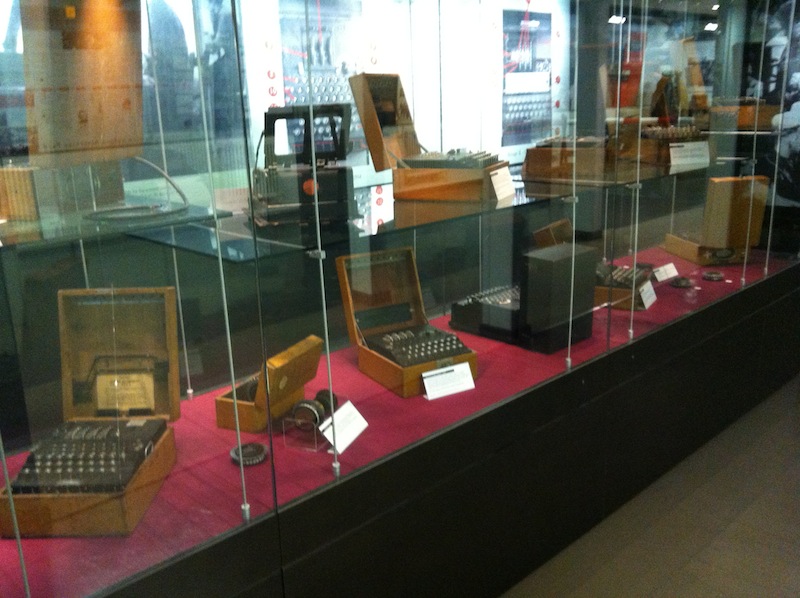 A crypto device from Siemens. 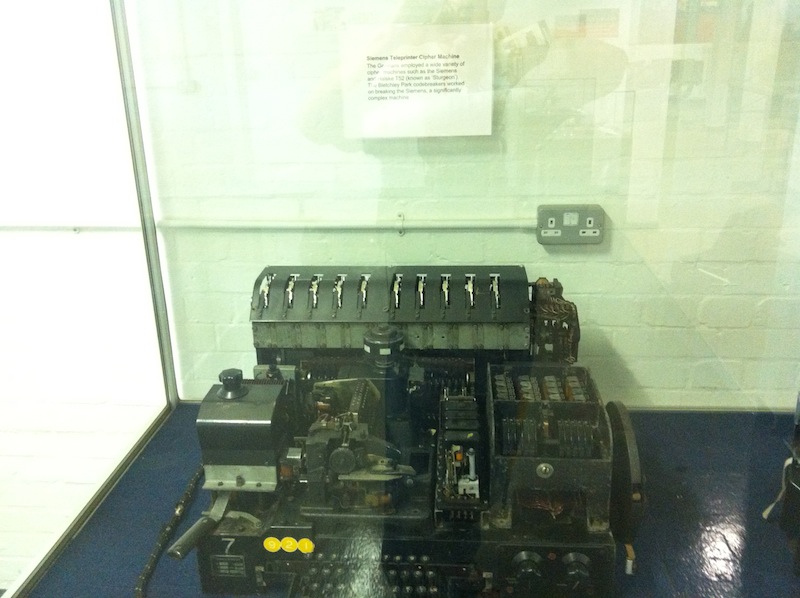 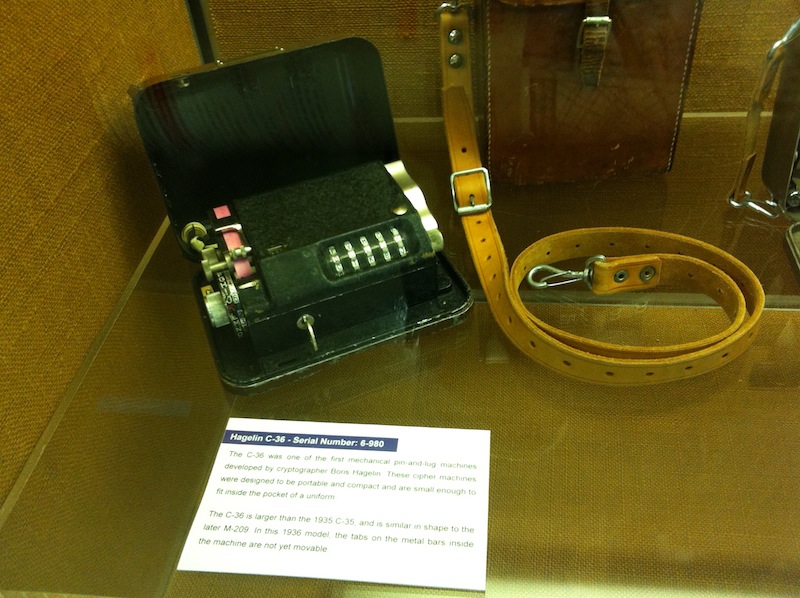 All exhibits are real and more than 70 years old. 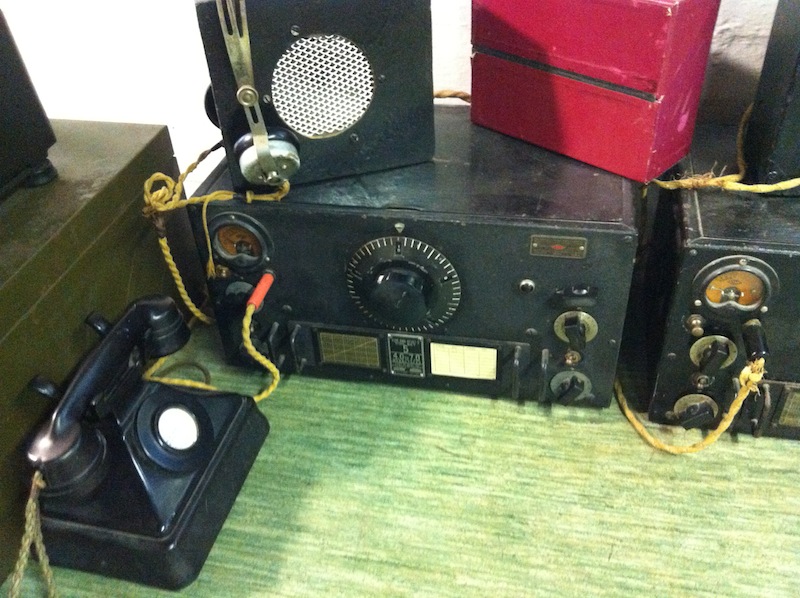 The Bombe machine which was build particularly to crack the Enigma code. 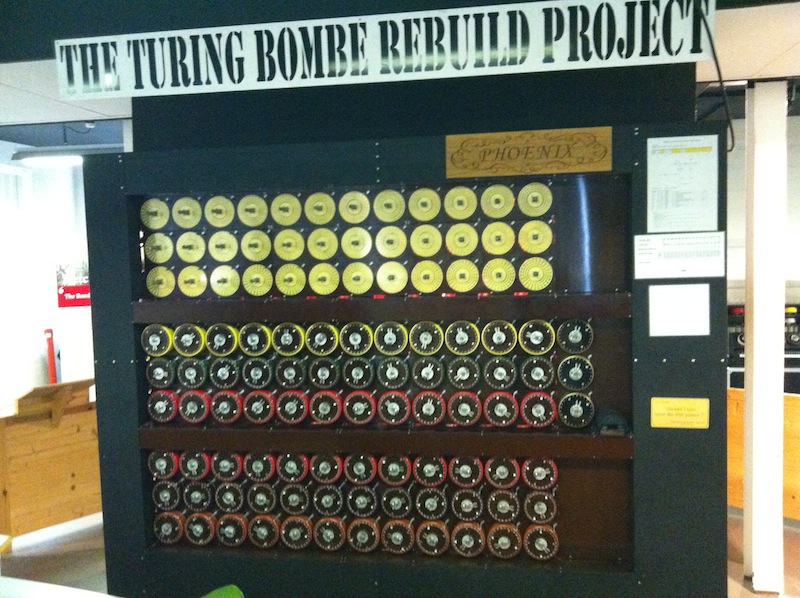 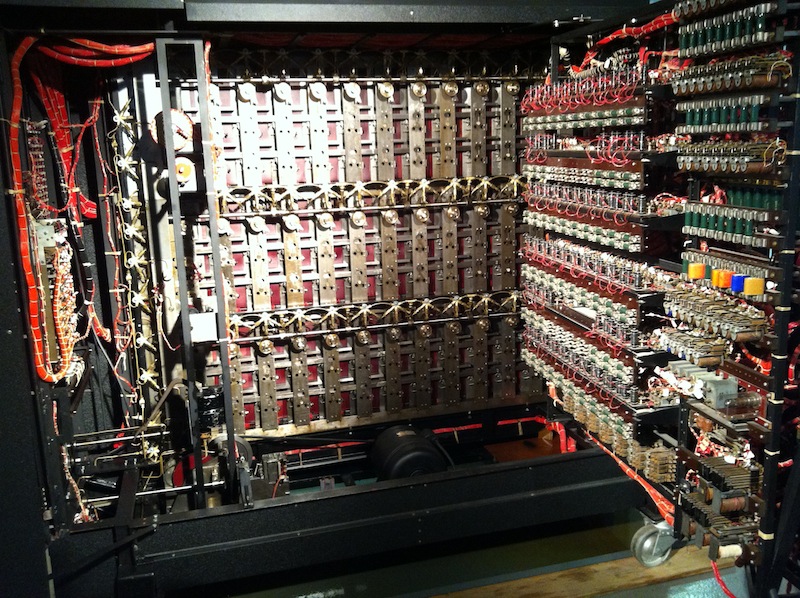 In a radio cabin. 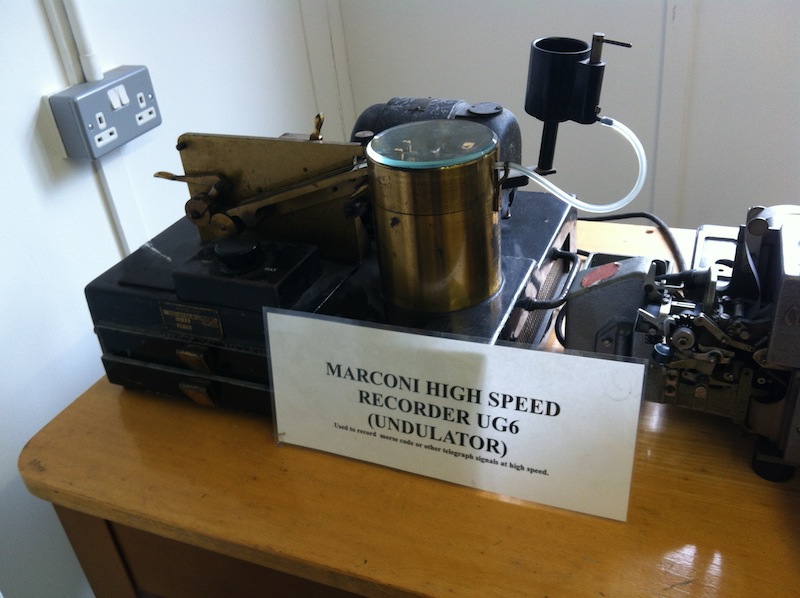 On the way to The Colossus. 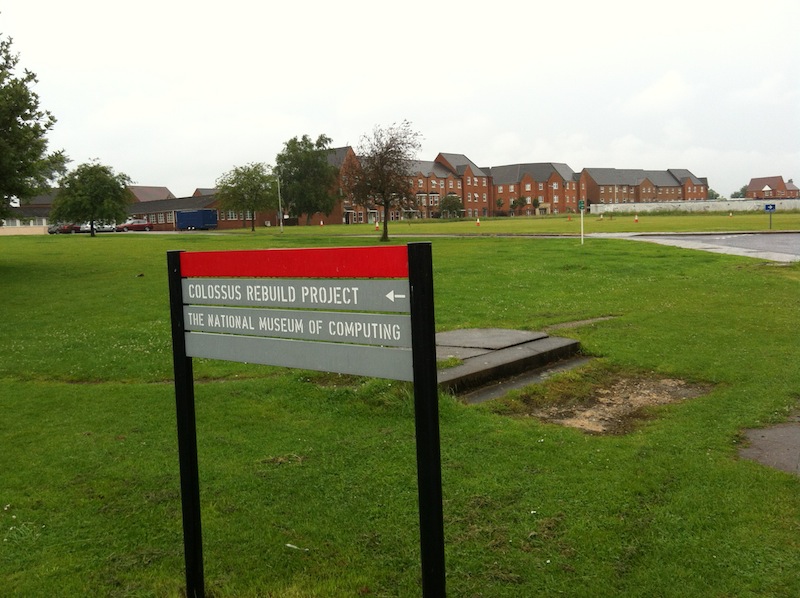 So, this is it – the top secret computer of the British secret service during the First World War. Recently it was re-built and now available in action.

This is a two panels stuffed with bulbs. The front panel, from the left. 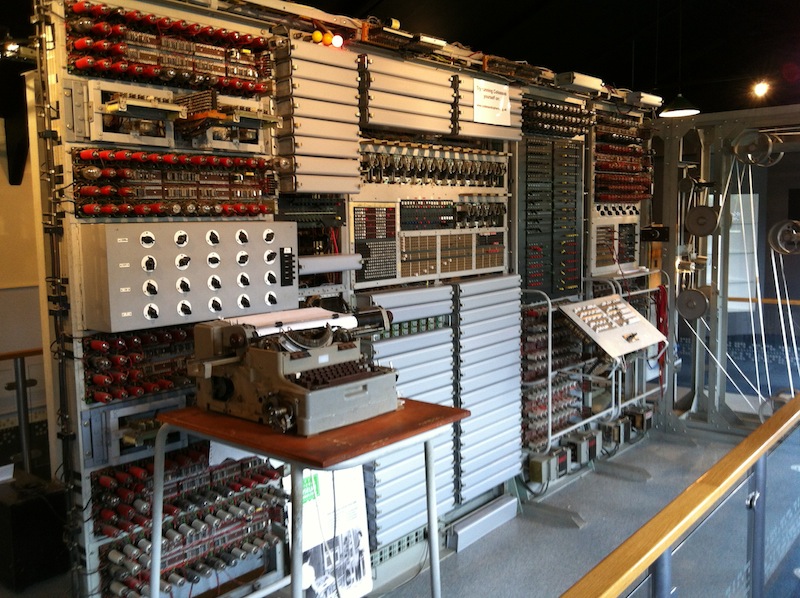 The front panel, from the right. 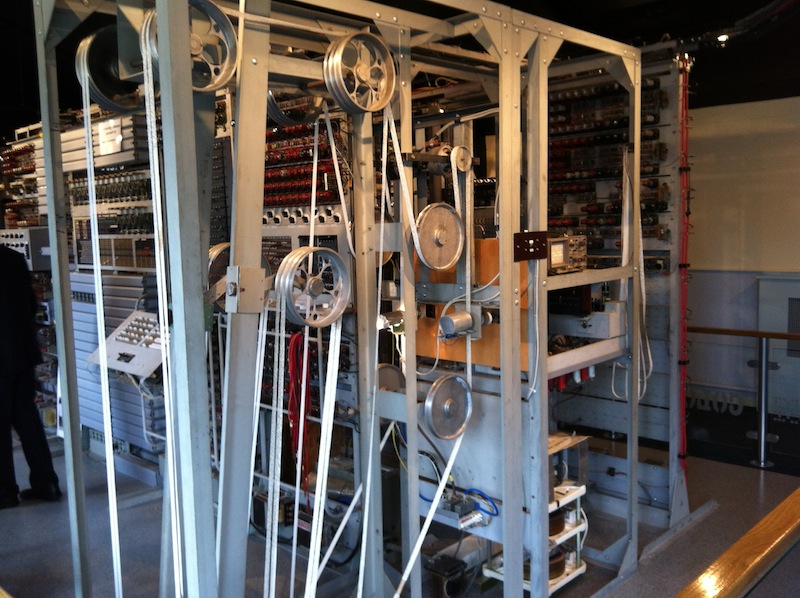 The back view. It is all moving and cracking. The modern fans on the floor are cooling the bulbs. 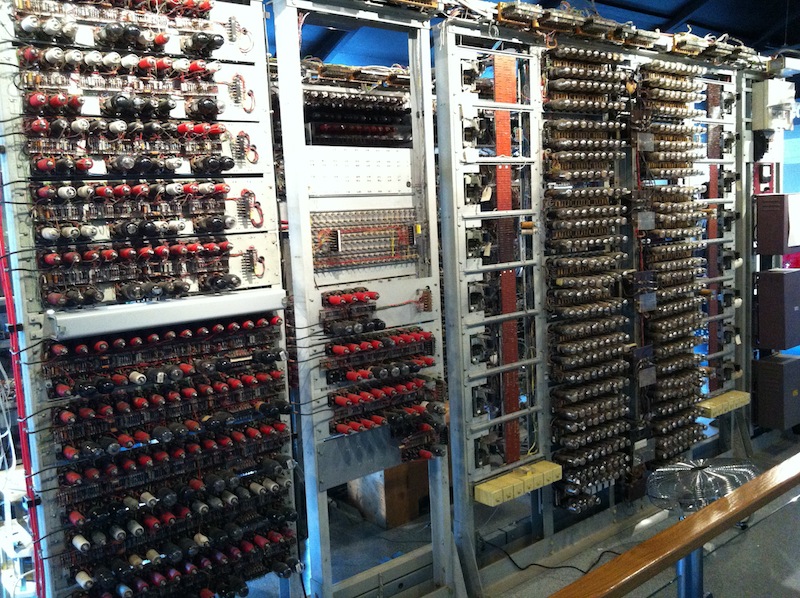 The back view from the left. 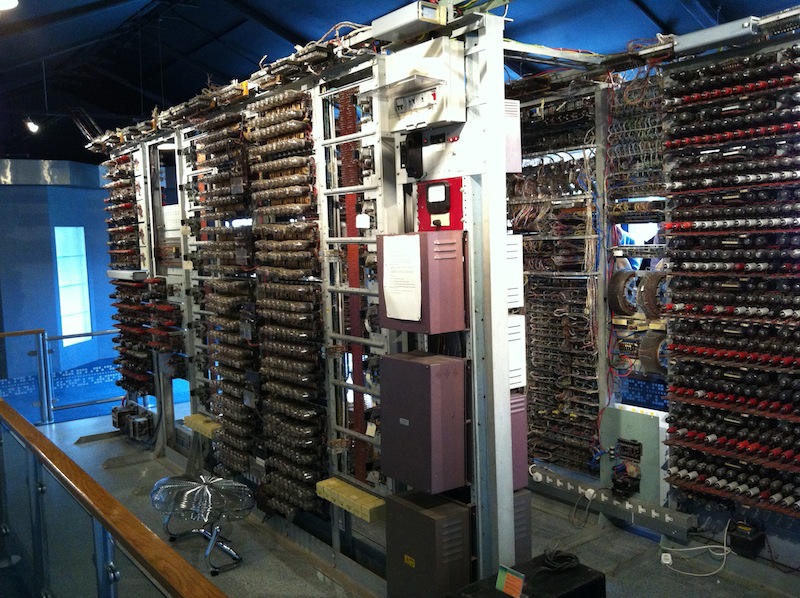 Between the panels. The oscilloscope even displays some figures. 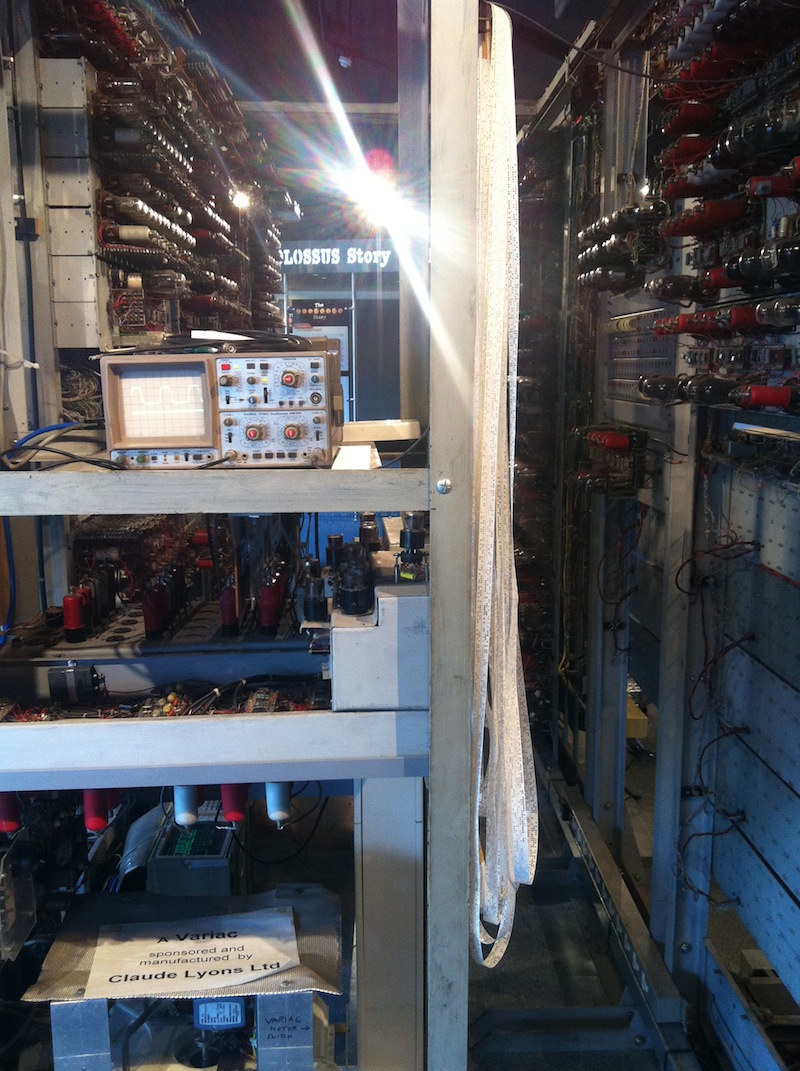 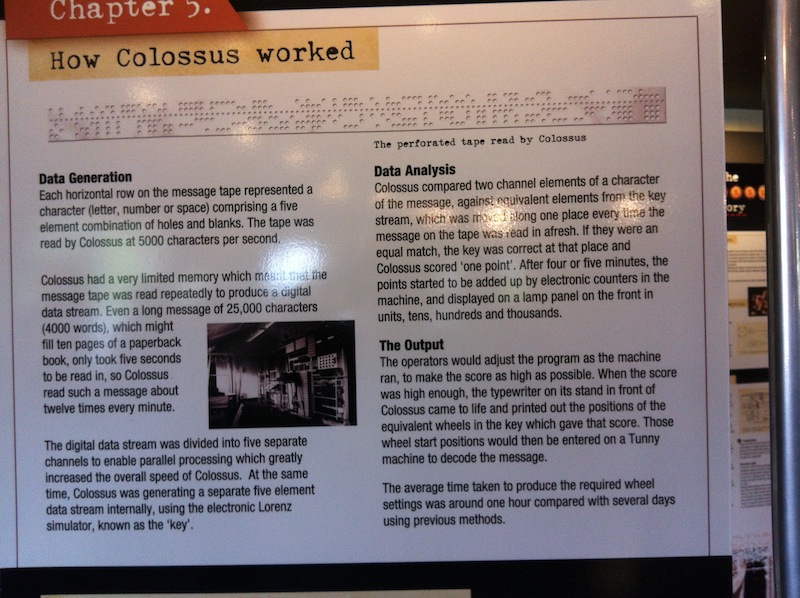 Frankly, it wasn’t impressed at all. Yes, it is moving and cracking by tapes and spins, but… May be if they allow to code up a little program in place, I was much more excited.

In the same building with the Colossus, there is a The National Museum of Computing. Today it was, a shame, closed. Trying to bribe a person on duty to allow me to pop into mainframe and PC rooms did work out.

There is only a sad picture through the bars. 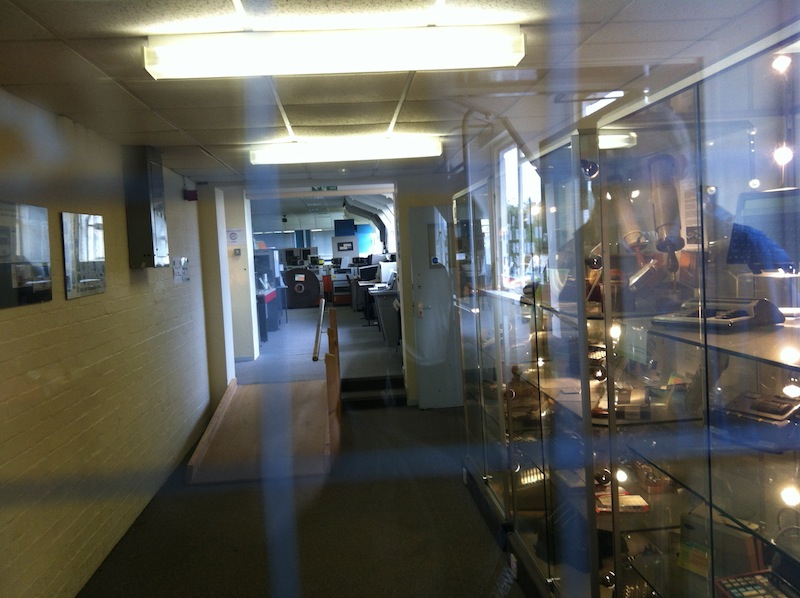 And this is the must have thing for any respectable bookstore (this is in the gift shop where they mostly sell books about the history of cryptography) – a sofa. 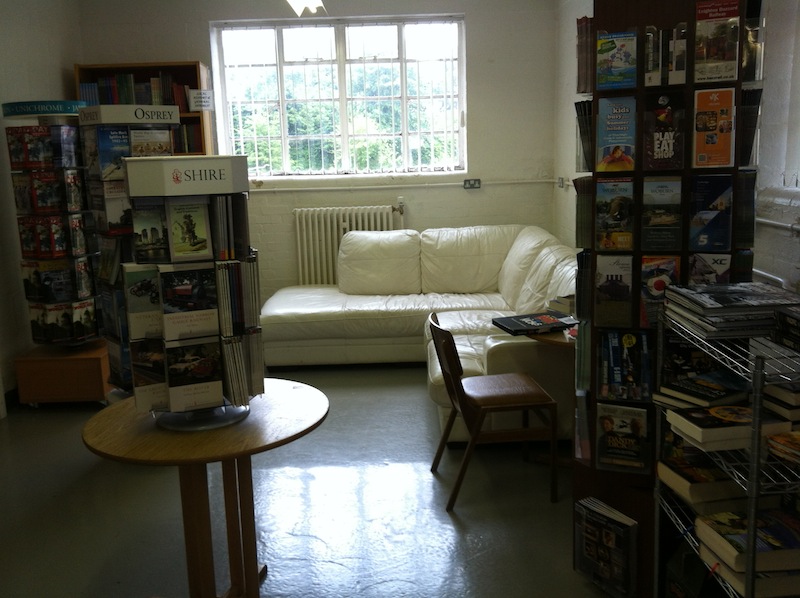