Veracity - an alternative to git, Mercurial, Bazaar and fossil

I read about “yet another” distributed version control system some time ago, called Veracity. They said that this is a decent candidate able to compete with all flagship DVCS.

So, let’s go right to the comparison table from the official web site. 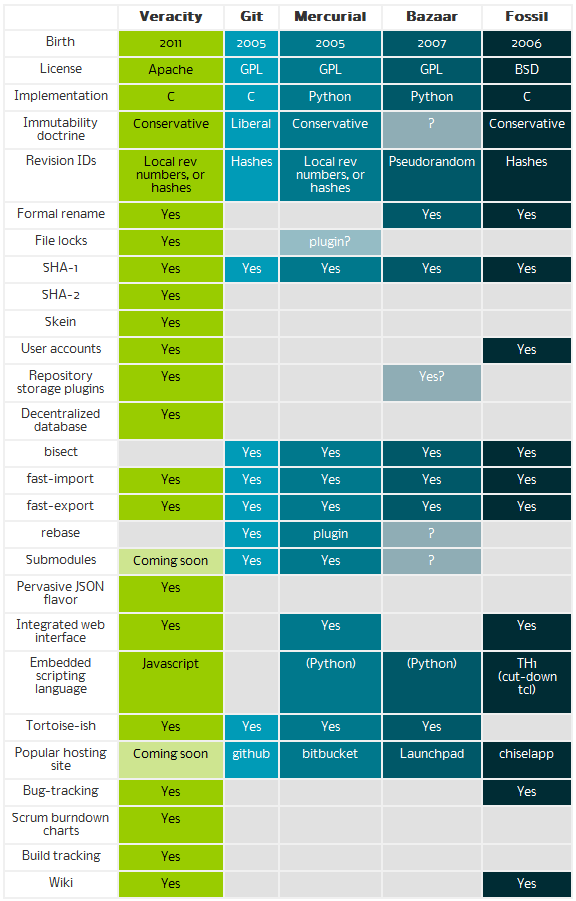 I wanted to figure out unique features for the sake of what they had started this project. I checked out a presentation from OSCON 2011.

Here is my subjective fifty cents:

There are a few principle decisions:

Personally for me, these two “features” definitely don’t fit into my way of using DVCS. For this reason I have stopped using fossil on my personal projects, though I loved the ability to have Wiki and a bug tracker built into the repository.

As a result it turns out that the key features of Veracity are “Not-GPL” and the external storages. It is obviously an attack on the corporate market. By the way, the company founder, Eric Sink, already had a DVCS product and company now acquired by Microsoft.

So, my subjective conclusion is that this is an attempt to bring DVCS into corporations.

Eric Sink wrote a book, “Version Control by Example”, in which he gives more or less fair comparison of Veracity against a few flagship DCVS. I flipped through it in half an hour, and I found a super quote, which I furiously share and actively promote (the selection in bold is mine).

When using a VCS, you shouldn’t comment out a big section of code simply because you think you might need it someday. Just delete it. The previous version of the file is still in your version control history, so you can always get it back if and when you need it. This practice is particularly important for web developers, where the commented-out stuff may adversely affect your page load times.