I read in papers that Google has launched an offline shop for Chromebooks.

I went to check out the stop and the Chromebook.

The “Shop” is a two desk place with a dozen of demo notebooks in the PC World nearby Apple, Sony and other departments.

The Chromebook demoing there is Samsung Series 5 3G.

Below there are a few not quite good quality pictures I’ve done during an hour playing with this device at the shop. 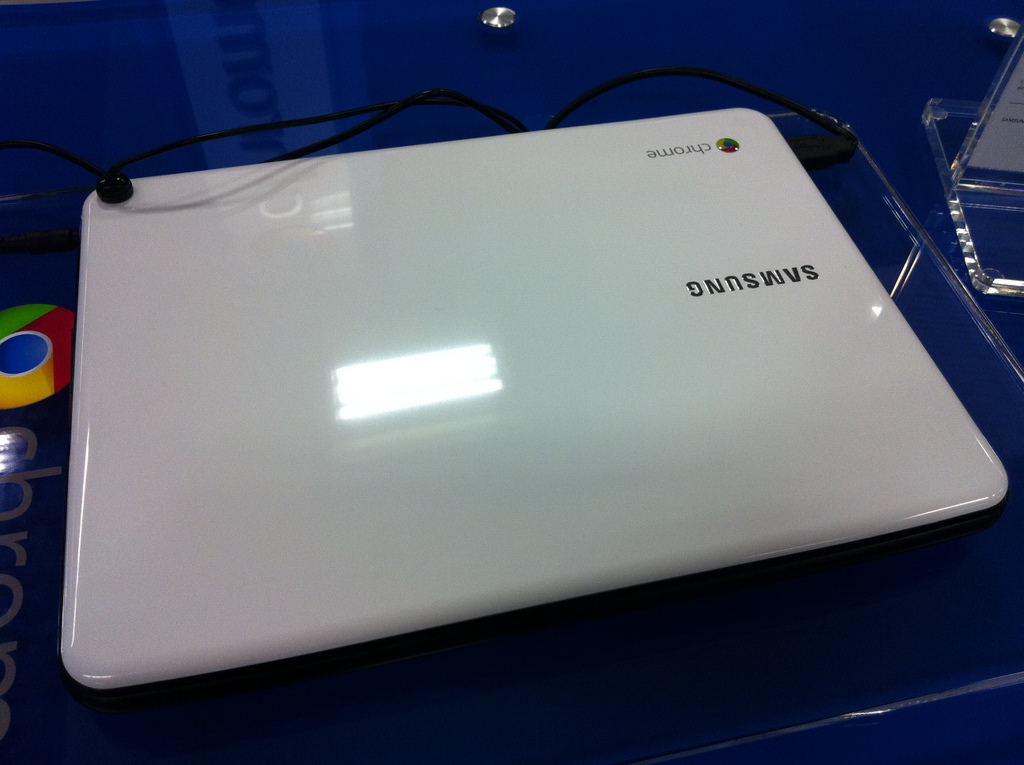 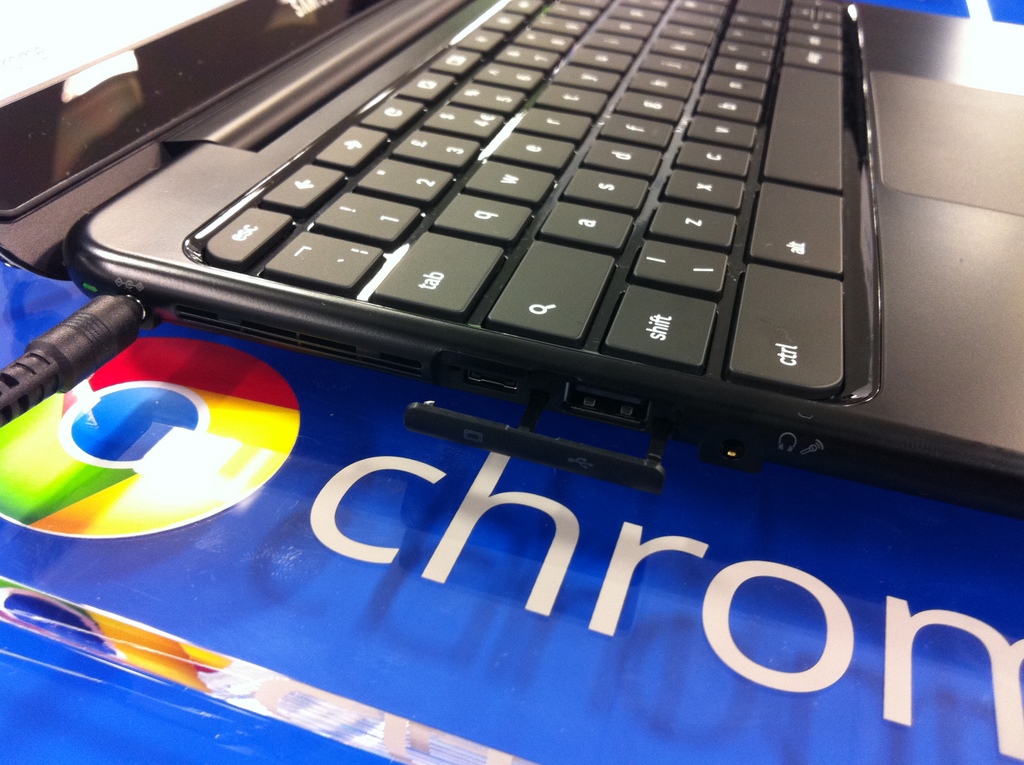 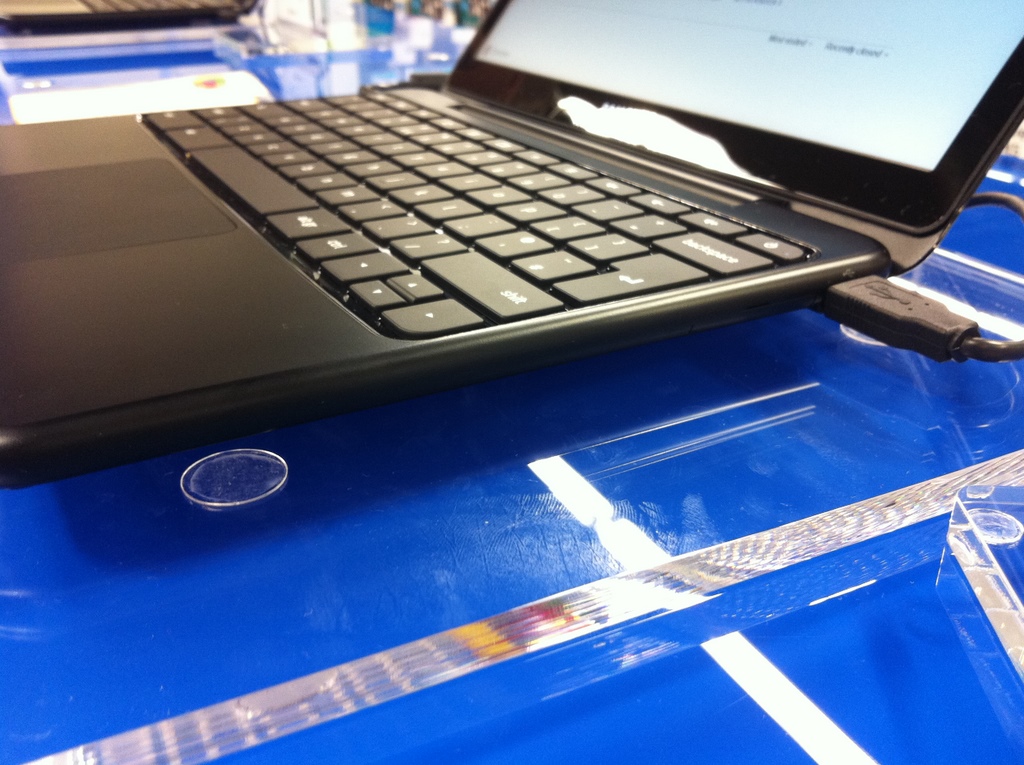 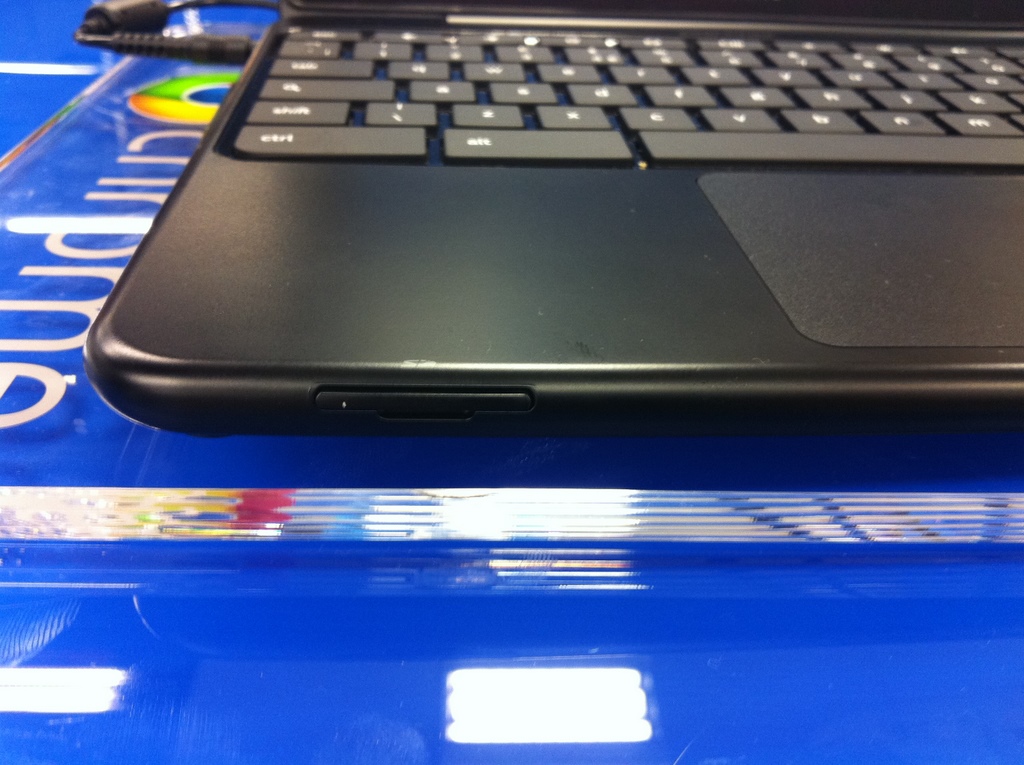 The power socket is quite fragile.

Look at the keyboard.

Above Shift there is an interesting button called “Search” opening a new tab and pointing the cursor to the URL bar. In fact, CTRL-T. I liked this button.

There are internet related buttons in the top row. The button between full screen and the brightness is the switch amongst Chrome windows when there are multiple of them opened.

There are no Ins, Del, Page Up and Page Down. 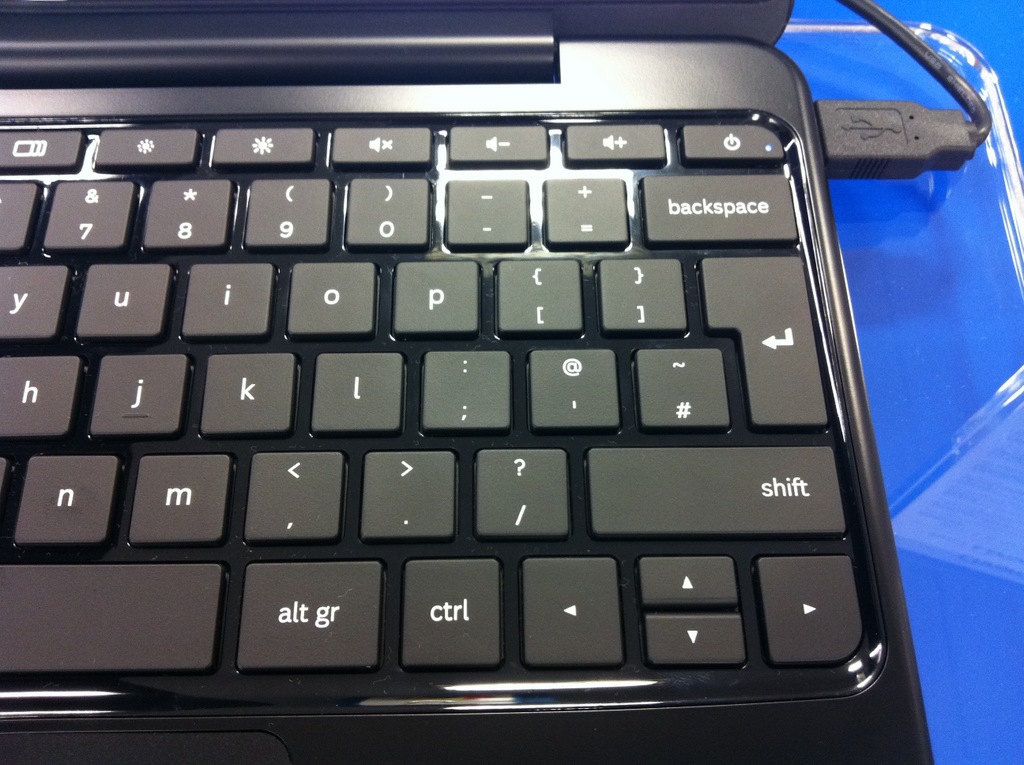 After 8 seconds of boot time you see a login window for your Google Account (I used a demo one), and then the main screen comes out. 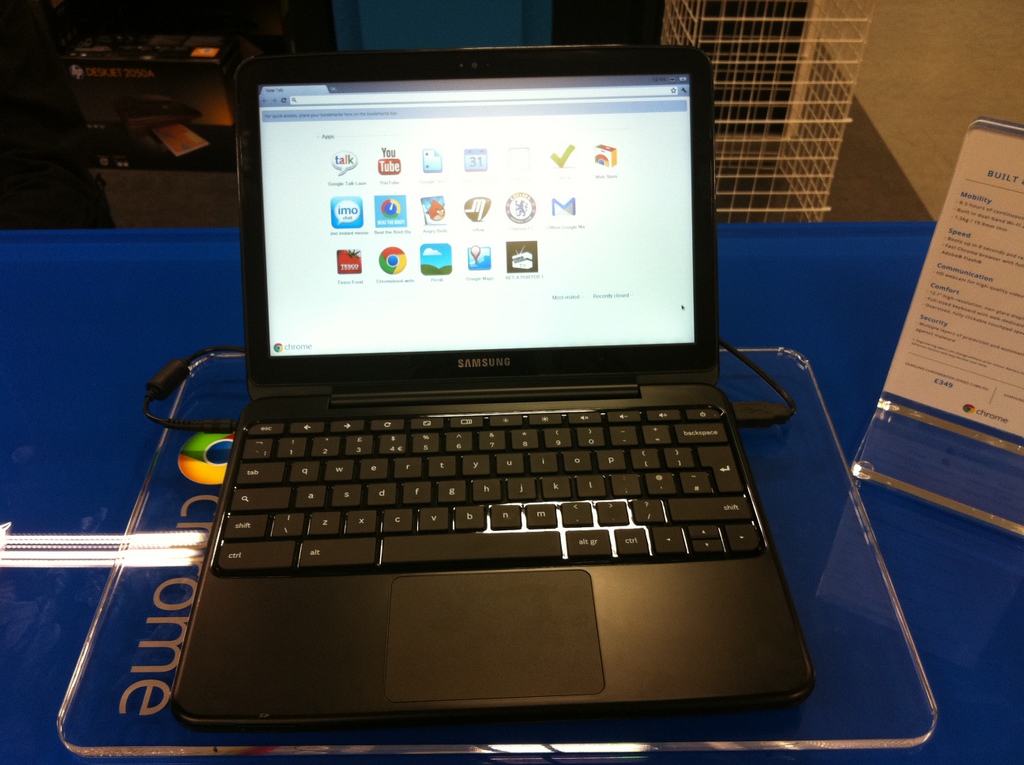 In Chromebook there is only one application - the Chrome browser. It is not possible to exit from it. You can only open new tabs and windows.

The Chrome itself differs from its desktop version. There are extra menus. For example, network settings. 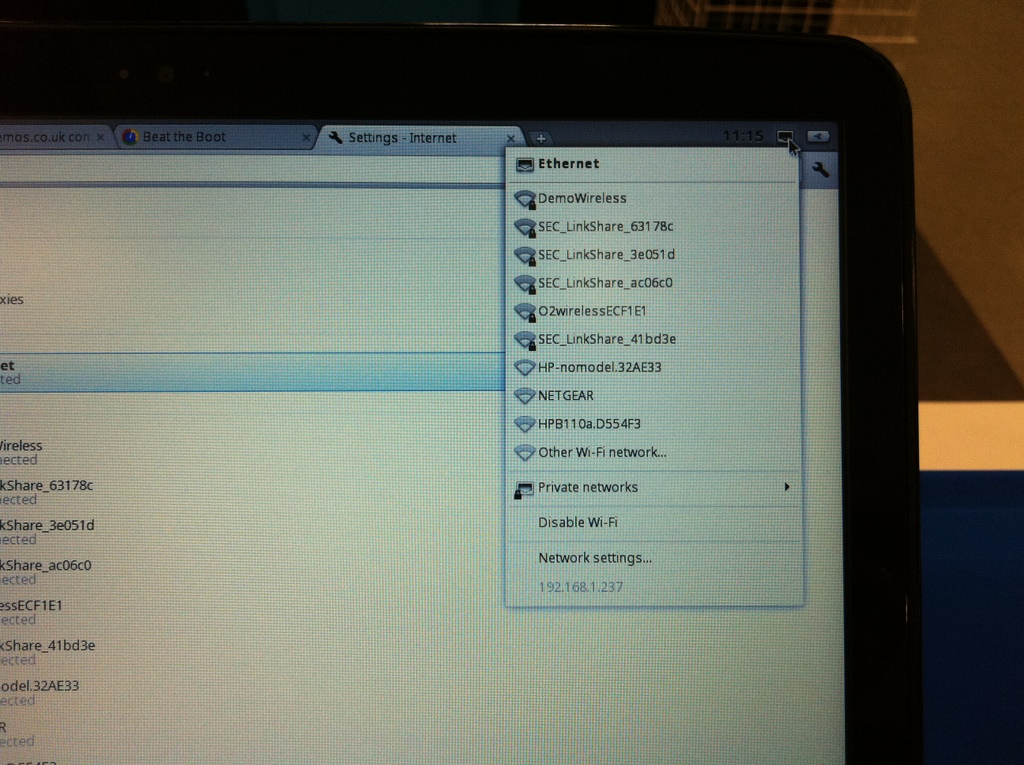 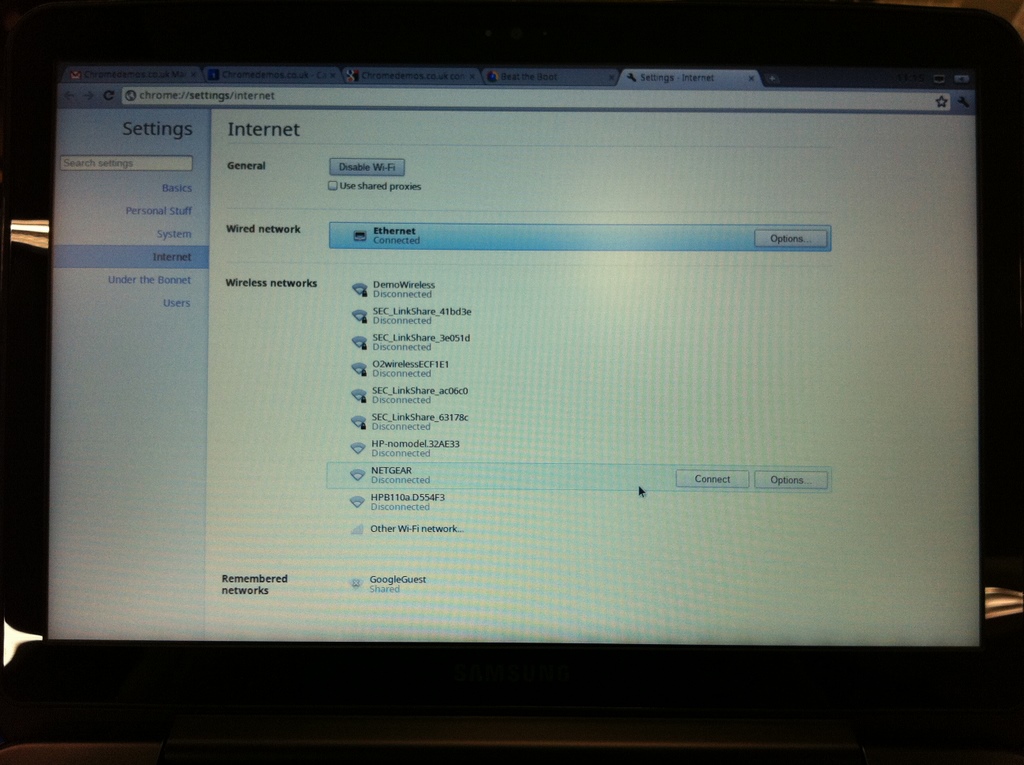 Russian keyboard layout is configurable through the settings. 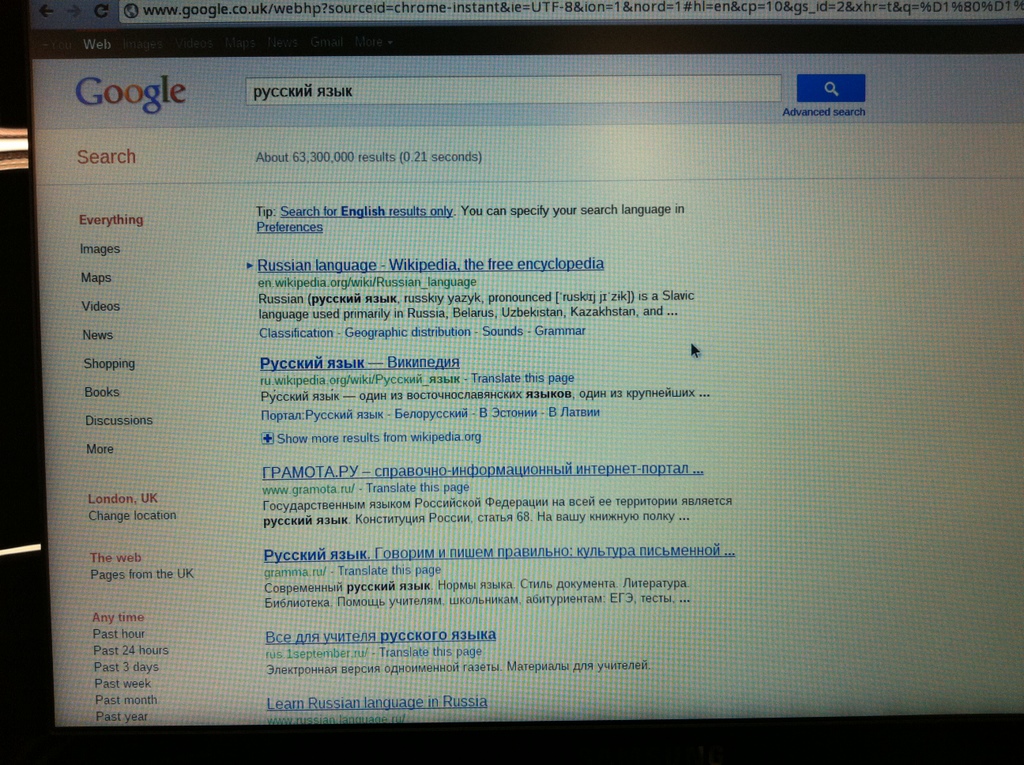 Printing works via a direct connection to a USB printer (HCL is provided), or a “proper” Google way printing via Cloud Print. 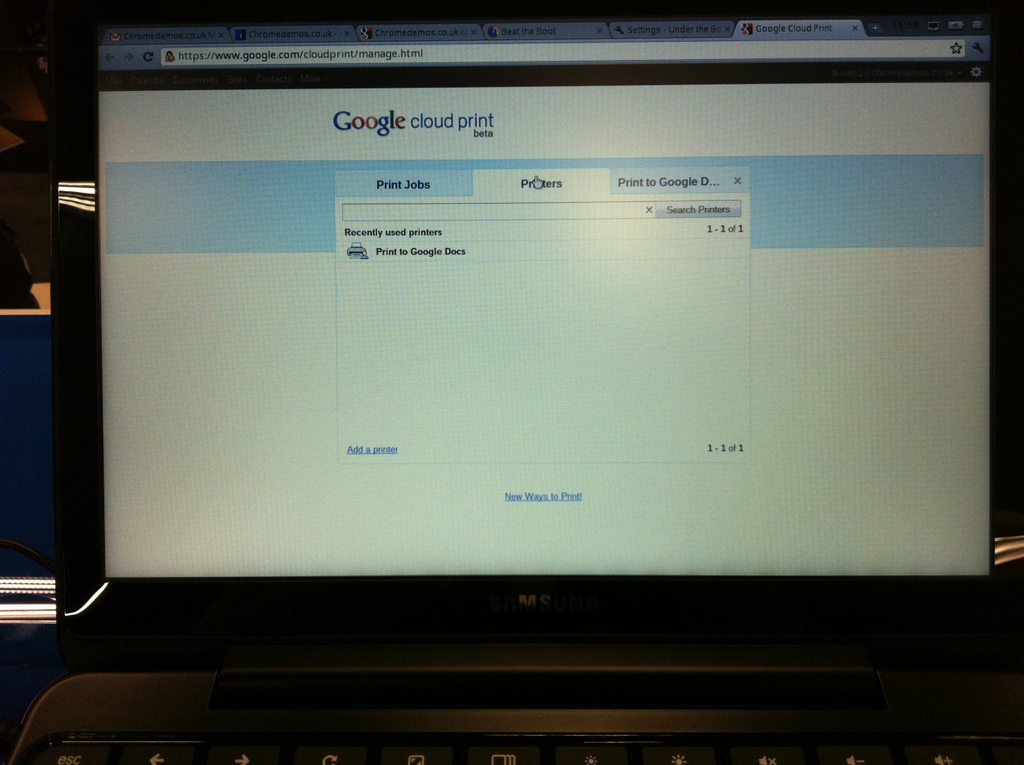 It is possible to keep files locally. For instance, you can attach them to e-mails. 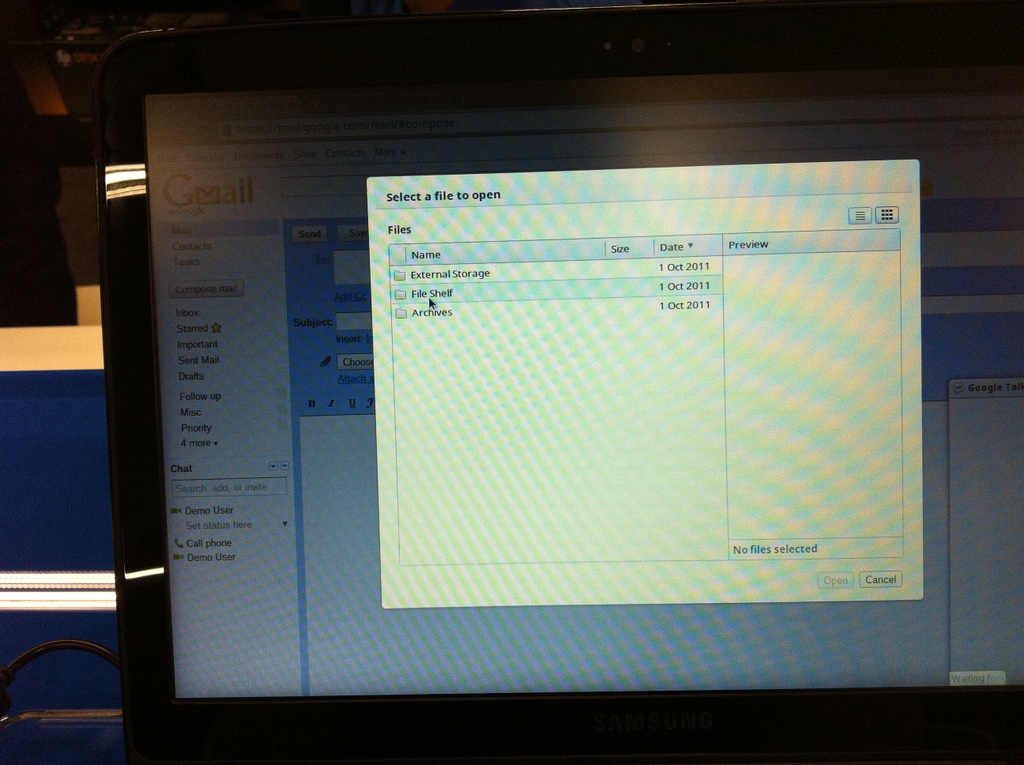 Only a few types of files allow to do anything with them. For example, photos and vides can be uploaded to WebPicasa. 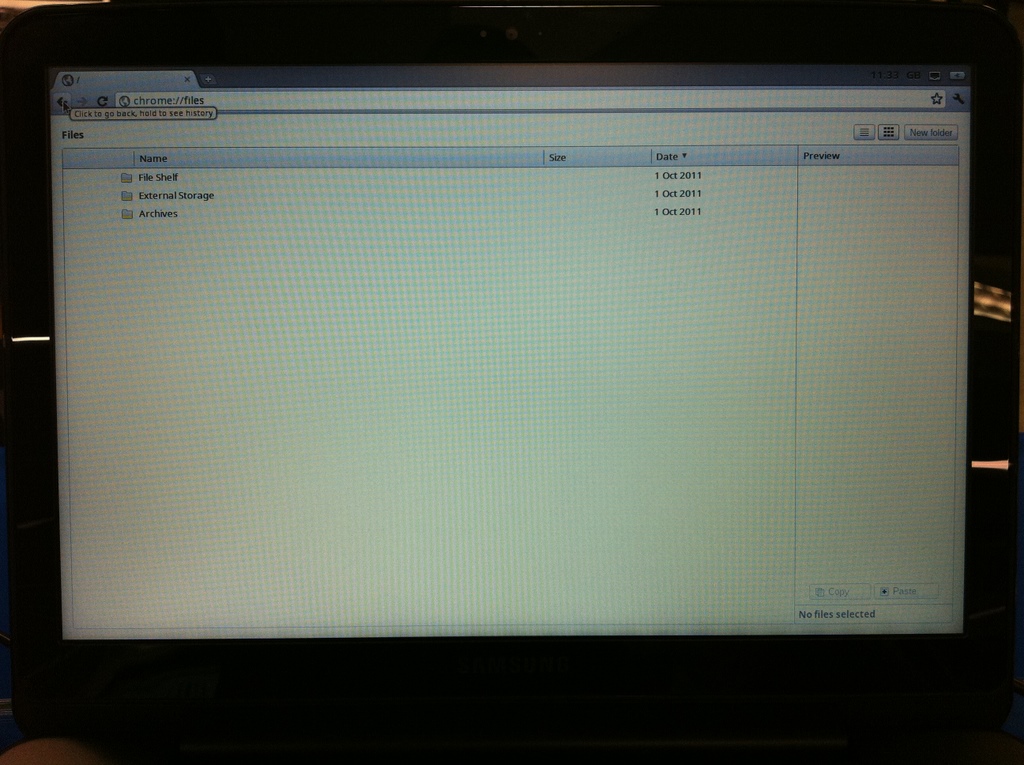 All downloads and screenshots also go to the local storage.

Skype was not available, so I tried GTalk (this is mine shaved head in the window). 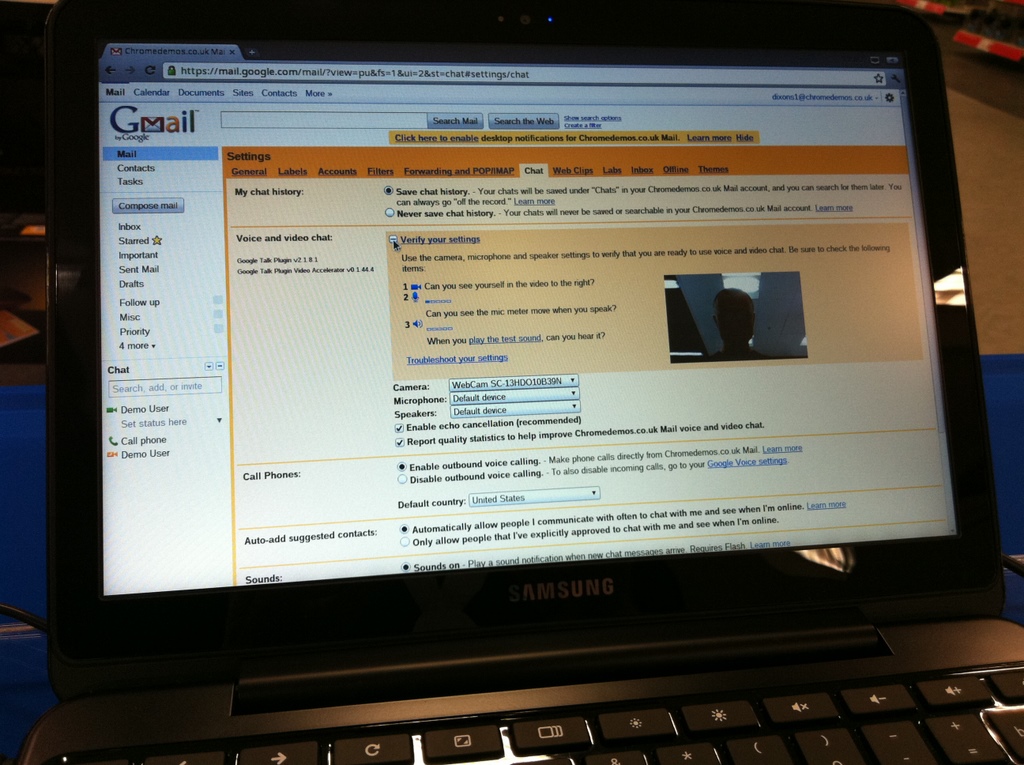 After a few minutes of jiggling around GTalk crashed. 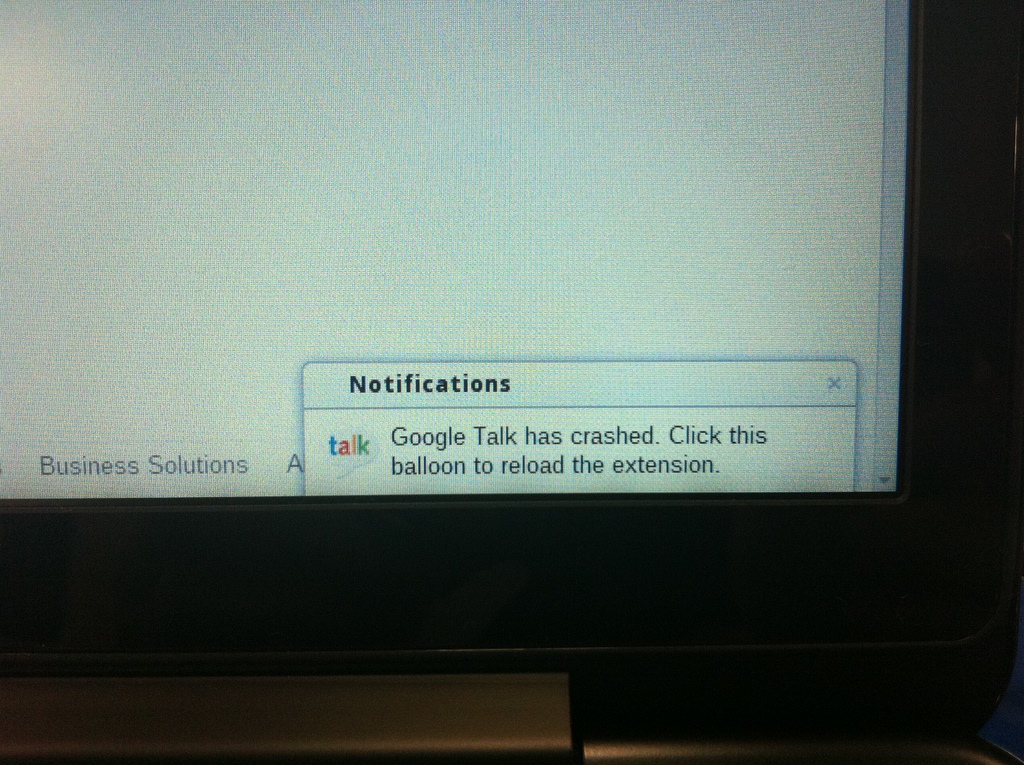 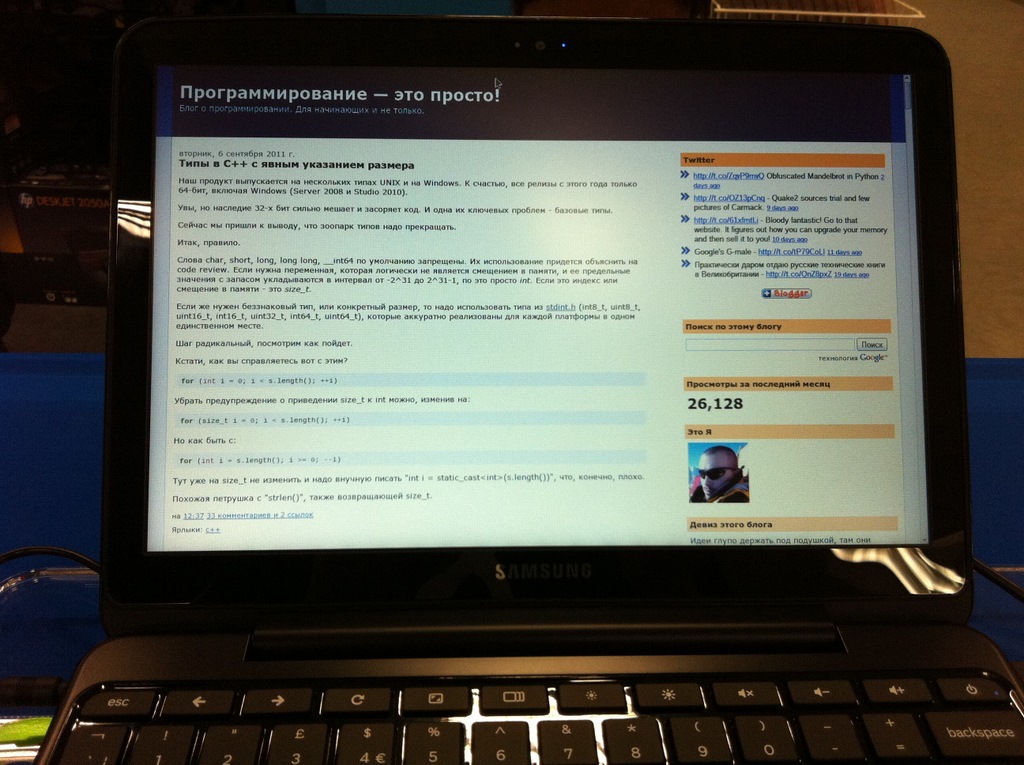 And another one to figure out the overall performance. 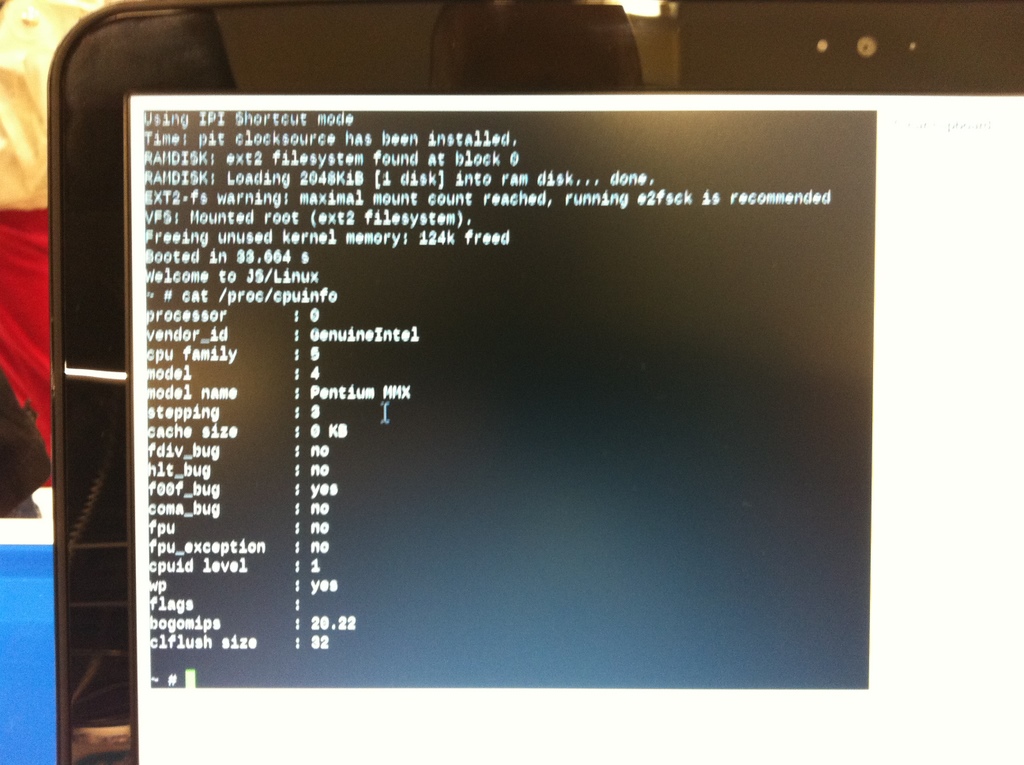 Linux booted in 33 seconds. On my Mac Air Core Due it boots in 8 seconds. But bogomips were the same (~20) for some reason.

400 quid is nuts. The notebook itself isn’t light, tiny and slick, which could be an excuse for such high price, but there are a dozen of other netbooks around doing the same stuff, plus the rest.

Even at the shop, where WiFi was really fast, working fully online becomes annoying very soon due to network lags. The official “Offline Gmail” is available but it is a joke, and barely usable seriously.

For 50 quid I could buy it right there, just because I use Google’s products and is willing to play with this “Google Console”, but 400 is “no, thank you”.